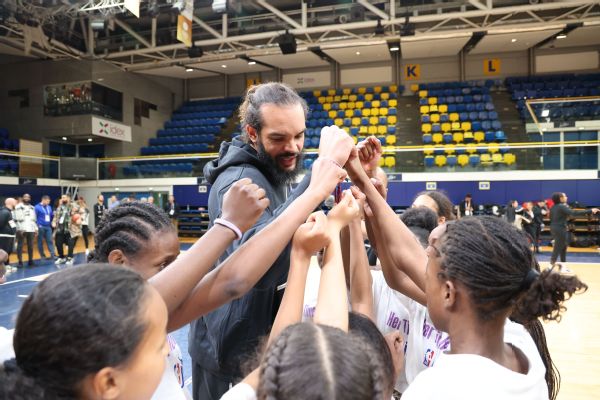 PARIS — Joakim Noah, like his father, is now a winner on the clay at Roland Garros.

Noah and Williams won in three “sets” — the first two were to six points, the final set to three points.

“I’d never played basketball here, for sure,” Noah said after the game, part of the lead-up events for Thursday’s game between the Bulls and Pistons in Paris. “I’ve hit some tennis balls a few times on this court. It’s a really special place.”

Noah’s father, Yannick Noah, was the French Open men’s champion in 1983. Joakim Noah was born in 1985, won two NCAA titles at Florida and was a two-time All-Star in a career that spanned 13 seasons — mostly with the Bulls.

For the record, Joakim Noah says he’s not exactly good at tennis. But it was a special moment to be on the clay where his father once reigned.

“Every time I see the pictures and the videos I know it’s a part of my history,” Noah said. “And I’m really proud of it. I know how hard it was and how much sacrifice went into being able to play at this level and to have that special moment of winning.”

The game, a promotional event for Wilson Sporting Goods, was 2-on-2 on half a tennis court, using the baselines and sidelines as out-of-bounds.